It is pretty much exactly half a year until we celebrate Halloween again, so I read this little book as part of the Bookstagram #halfoween readalong, and it was a fabulously creepy experience. Here is a plot synopsis:

At a first and superficial glance Strang may appear to be your typical quaint little town. However, living here is a horror in itself. Every night the town is haunted by a creature that the townsfolk refer to as Halloween. As soon as the sun sets, Halloween shows up to collect its treats: a small, live offering from each household. The residents comply as no one wishes to be the target of Halloween’s menace. After all, people who antagonize the creature tend to get brutally dragged away from their homes. But this everyday nightmare of living in Strang is nothing compared to the yearly ritual Halloween demands of the citizens on All Hallows’ Eve. 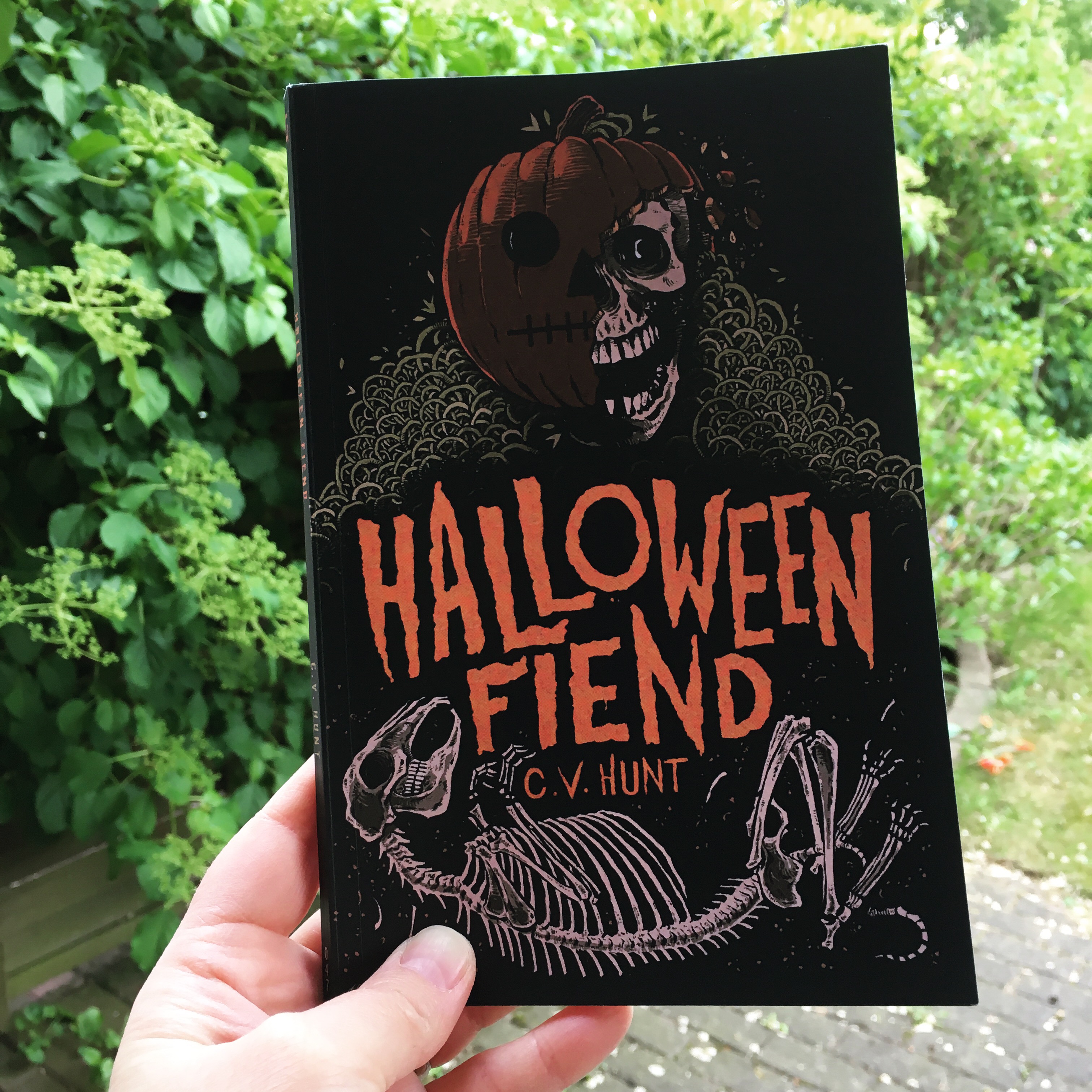 C.V. Hunt's Halloween Fiend is the sort of book you wish to have on your bedside table on Halloween. I read it on a sunny spring afternoon but I kind of wished that I had saved it for a crisp autumn evening. The book perfectly captures everything that makes the time around Halloween special and you can almost smell the rotting leaves while reading the story. I particularly like how Hunt has gone beyond simple creepy ambiguity and manages to give us a downright scary story. The book cleverly plays with traditions and conventions and with typical Halloween tropes.

What the author catches extremely well is the dreariness and drabness of the town as well as the unique voice of Halloween, the monster, who is here depicted as the quintessential boogeyman. Hunt throws everything we know about the holiday of Halloween into this story, then takes out a giant ladle to stir it all around till it becomes something new. Something new and terrifying.

There are echoes of other texts - some readers have mentioned a clear nod to Jackson's "The Lottery" or quite a few Lovecraftian elements and influences - but the author skilfully weaves together old traditions and her own twist on what is going on in Strang, so that this is a new and modern version of an established topos. The reader feels with the characters - which in itself is an achievement as they are all quite unlikeable - and is kept on the edge of their seat until the end. Yes, the ending is a tad predictable but for me it still had that satisfying "we are still doomed" feel to it. For me personally, it isthe perfect non-solution/open ending that we love so much in the genre of horror.

This was my first C.V. Hunt story, but it will definitely not be my last. I highly recommend this book to anyone who loves Halloween or anyone looking for a bit of a scare. Halloween Fiend is a very short book so it's readable in one sitting - perfect for that stormy autumn night mentioned above.