Addie LaRue – the name itself already makes you curious about this story. If you are also interested in sweeping, historical novels that have a strong personal focus: Voilà, V.E. Schwab’s latest novel is the right book for you.

“Never pray to the gods that answer in the dark.”

France, 1714: in a moment of desperation, a young woman makes a Faustian bargain to live forever and is cursed to be forgotten by everyone she meets.

Thus begins the extraordinary life of Addie LaRue, and a dazzling adventure that will play out across centuries and continents, across history and art, as a young woman learns how far she will go to leave her mark on the world.

But everything changes when, after nearly 300 years, Addie stumbles across a young man in a hidden bookstore and he remembers her name. 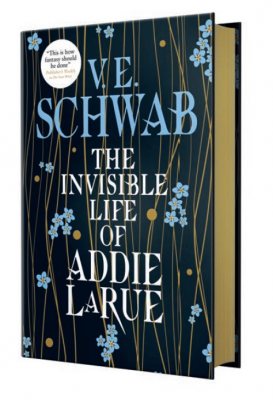 Schwab’s novel is full of nods to other writers as the intertextual connections range from Shakespeare to Goethe to the classic folk tale to contemporary fiction. What the author does fabulously is connect these more or less subtle references with a loveable protagonist and a tour through European (and a bit of American) history. The story of Addie LaRue is told in two different timelines. Timeline one takes us to 17th and 18th Century France, while timeline two is centred in 2014 New York City. Addie has lived for several hundred years and she is both alone and extremely lonely. Due to a curse after striking a bargain with the devil(?), people forget her the moment she leaves their sight, so Addie is walking through cityscapes and history like an invisible flaneur.

What captured my attention here right away was Addie’s incredibly depressing isolation. That really got to me! She is a fleeting character, she leaves no trace, she lives like a ghost, she is lost and wandering, but yet she has so much depth, and you find yourself rooting for her to finally find someone who remembers her. When Henry appears he seems to be the only one who is able to anchor her, and the reader immediately realises that his showing up is working towards a climax without knowing what it will turn out to be. In a way, this topos reminded me of Audrey Niffenegger’s wonderful novel The Time Traveler’s Wife which is also about somebody lost in time who finds that one person working as a sort of fixture (also the two characters are sharing a name).

Schwab tells Addie’s life in the form of palimpsest: Life overwrites life but never fully erases anything. History keeps popping back up (see the speakeasy scene) as does the devilish creature a.k.a. Luc who initially tempted Addie to forge a pact. And this is another aspect that makes the novel so interesting: The dynamic between Addie and Luc is simply mesmerising. It is a love/hate kind of relationship, and it is particularly Luc’s simultaneous cunning and caring that captures the reader.

There is one little point of contention, however, a mistake in the ARC which I hope has been corrected for the final published version: There are some historical inaccuracies, the one about Paris’ basilica Sacré Coeur being mentioned in scenes set centuries before it was actually built being the gravest. This is something that simply mustn’t happen in a novel with such historical scope. All in all though, The Invisible Life of Addie LaRue is a great novel and I highly recommend to everyone.