I came across this book because it was hyped on Instagram this autumn. The plot sounded like it was exactly right for my reading tastes around this time of year, so I decided to give it a go.

A gang of twelve-year-old boys are trick-or-treating in London. Off in the distance, they hear the discordant chimes of an ice-cream truck. It seems strange to hear on a cold autumnal night, but their thoughts of maximizing their candy haul soon dismissed its incongruous melody… until they saw the rusting hulk idling in the shadows at the end of the street, its driver a faceless shadow. That was the night he took one of them.Years later, Halloween is fast approaching and Tom Craven is still haunted by the events of that dark night, especially the fact that their friend was never found. Increasingly plagued by horrific visions, Tom returns to the place where it all began, only to discover he's not the only one who can feel it. His friends have already arrived and are preparing for a battle which could get them all killed. The Ice Cream Man is back… and he’s come for the ones that got away. 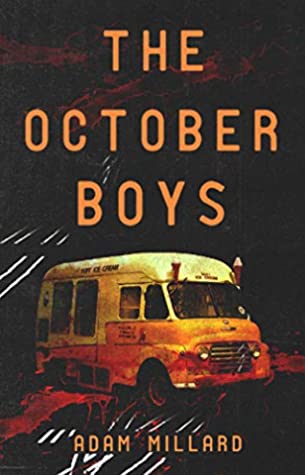 I really really really wanted to love this book. The first few pages had me hooked straight away with their spine tingling eerieness, and I was reminded of Stephen King's wonderfully creepy tales. Then, however, things went downhill very quickly and I found myself being increasingly annoyed with this book. Here are the main points of what irked me:

- Inconsistency/anachronisms: This story is set in England, yet the author jumps back and forth between British and American English. I would have wished for him to be consistent and settle on one. The thing that really threw me off, however, was the sloppy research and editing. A poster of Will Smith as Ali in 1988?? That movie came out in 2001 and, honestly, that is a mistake that could have been easily prevented but one that somehow completely diminished my joy in the story.

- Treading well-known paths: I normally enjoy books that work with intertextuality but The October Boys is basically a mixture of established Stephen King tropes. Supernatural entity haunting a bunch of kids? Check! Kids meet up again after several decades? Check! Now adults they finally have to confront that which scares and haunts them? Check! These are just some points where the story leans heavily on well-known plotlines... you get my drift.

- A rushed and unconvincing ending (Warning: mild spoilers ahead!): After all the build-up and tension I would have expected a somewhat more convincing ending. Instead, we get a total of six pages in which the monster is quickly defeated. The way in which the demon is vanquished is - I'm sorry to say this - so lame that I wanted to throw the book across the room.

I feel bad for having to give this story such a bad review because it is clear that Millard is a wonderful author. He writes beautifully and knows how to chill his readers to the bone. With a lot more tweaking and editing, this could have been a really good book but unfortunately it falls short in so many aspects that I was deeply disappointed. I will check out other titles by the author, however, and hope that they work better for me.